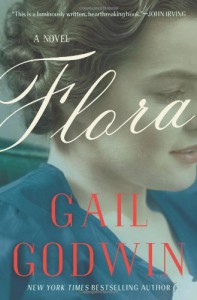 Gail Godwin has long been one of my favorite authors and Flora is a fine example of why. All the main characters seem so real it's hard to imagine they're actually fictional, but instead of making them prosaic their fullness, including their flaws, makes them both fascinating and sympathetic, and it's a tense pleasure inhabiting their world. The story's time and place--an isolated mountain home during the final months of WWII--are also well realized and the book held me enthralled.

The story is told by Helen, an older woman looking back on a summer from her childhood when she was in the care of her twenty-two year old cousin Flora, an open-hearted, unreserved woman who embodies everything Helen has been taught to look down her nose at by her dignified grandmother and her cynical father. Both Helen's mother and grandmother are dead, so when her father leaves their once grand, now dilapidated, house to do secret war work Flora volunteers to help. Flora's emotional outbursts embarrass and irritate Helen, but a polio outbreak means their only company is the family's longtime maid, the young man who delivers groceries, and the local priest. With her grandmother dead and her father away, times are changing, but there is a lot of history in the house and Helen is desperate to hold onto the way of life she has always known. The book hints at tragedy from its early pages, but that's a distant storm not yet on the horizon and most of the story deals with the captivating day to day schemes and struggles of Helen as she tries to make the best of her situation.