Author calls this “a light-hearted romp through the environmental apocalypse” 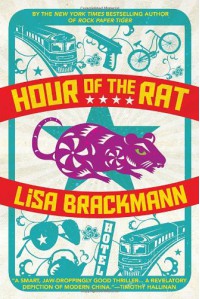 While Hour of the Rat could be read as a stand-alone, after the first few chapters I really wanted more context and character back-story, so I downloaded and read the first book, Rock Paper Tiger, on my Kindle, after which much of my weekend was consumed by the two books. Both books are set in China and excel at giving the reader a vivid and fascinating sense of place, and both books also have something that was new for me and I thought very cool--scenes set in online computer games.

Since the earlier story, things have settled down for Ellie. Though her Iraq War injury is still painful, her relationship-challenged mother is on an extended visit, and she continues to drink too much, Ellie’s life has a precarious kind of balance. She’s making a decent living managing the artwork of an artist authorities would like to question, but no one is harassing her about him. Then an old army buddy asks her to try to locate his missing brother, who's somewhere in China but  facing charges in the US for environmental activism, and it’s like she’s kicked open a hornets nest.

While its suspense is gripping and its environmental realities are sobering,  this book is also packed with humor. My fingers are crossed hoping there will be a third book about Ellie.

NOTE--Though this is a new book , today the Kindle version is selling for $1.39.

Read what the author says about this book here:  http://www.lisabrackmann.com/books/hour-of-the-rat/