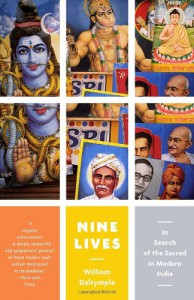 I just finished re-reading this amazing book--here's my original review from 2011:

The religions most of us are familiar with have been largely standardized and homogenized, but obviously this wasn’t always so. Like languages before the advent of writing, earlier versions of even the same religion had local accents, traditions and emphases that varied substantially from place to place. That early world of indigenous religions still exists in parts of India, and in Nine Lives author William Dalrymple sensitively chronicles the poignant, eye-opening personal stories of nine religious devotees whose practices are outside--sometimes far outside--of the mainstream.

The regional outlook of many of his subjects is summed up by one of the last hereditary singers of an ancient, locally-based epic poem that is so long it takes five eight-hour nights, dusk to dawn, to perform. He explained to Dalrymple that of course they were careful to propitiate the “national” gods like Shiva and Vishnu, who control the cosmos, but for their daily needs it made more sense to pray to the local god-kings and heroes who understand their farming life in a way the great gods could not. It’s like going to your county council representative rather than the president of the country to have a new stop sign put in your neighborhood.

Dalrymple must have a gift for getting people to open up, and he writes beautifully and with great respect for his subjects. Those subjects include a Dalit or untouchable who becomes a god sought out by Brahmins for several months each year, a Jain nun who is chaperoned by a naked monk part of the time Dalrymple speaks with her, a devotee of the fearsome goddess Tara who lives by the funeral pyres of a cremation ground, a blind wandering Baul who sings songs of worldly liberation, and a Tibetan Buddhist monk who is atoning for being forced to fight for his religious beliefs.