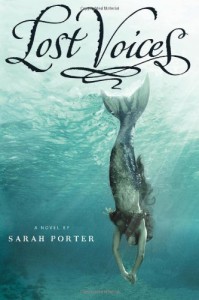 Initially it almost seems like a dream come true when Luce is transformed into a mermaid, because for the first time in her life she has friends, a powerful body and an incredible ability to sing personal songs that are beautiful enough to control the seas, but this is not a simple story with a shiny happy ending. Luce's human life was never great, but since her father died leaving her in the care of an abusive, alcoholic uncle it has been horrible.

It's his abuse that leads to Luce's mermaid metamorphosis because in this book mermaids are young girls who have been mistreated in their human life. This makes many of the mermaids despise humans, and bewitching people with songs until they jump from their boats and drown is one of the things mermaids in a tribe do.

While Luce loves being part of the group and does participate in the attacks on ships, both because it's required and because it seems to be an almost irresistibly instinctual part of being a mermaid, she is never comfortable with killing humans. The tensions between group loyalty, natural instincts and individual conscious drive the story into some uneasy waters.